The British School of Barcelona, Spain

ABOUT The British School of Barcelona, Spain

BSB is a caring. learning community with high expectations. Founded over 60 years ago, BSB offers an all-round international approach to children’s learning and development.

It is formally recognised and accredited by the British government for teaching the English National Curriculum, and is an accredited IB World School offering International Baccalaureate® (IB) Diploma Programme (DP). BSB also offers the validation of Spanish ESO and Bachillerato.

BSB has four campuses located in Barcelona City, Sitges and Castelldefels, and each year its students, of over 50 nationalities, are offered places at some of the best Universities across the world such as the Russell Group, and other British, Spanish and international universities.

The British School of Barcelona has been a Cognita school since 2007. 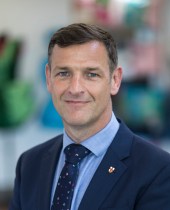 Jonathan Locke has been the Executive Principal of The British School of Barcelona since September 2018. He was the former Head of Leventhorpe School, in Sawbridgeworth, England, and having completed 20 years as a member of three senior leadership teams, the last 10 as Headteacher, he has significant experience in leading school communities through change and innovation.

Jonathan has a proven record of success at Leventhorpe, which was judged to be an Outstanding school by Ofsted and became a National Teaching School. He has been accredited as a National Leader of Education (NLE). Jonathan is committed to the principle of educating the whole person through equality of opportunity and the meeting of individual needs, and believes that students work best when they feel valued and that an effective school recognises individuals’ strengths and talents.

Prior to his current headship, Jonathan has had a hugely successful career in senior leadership positions at Sir John Lawes School and Richard Hale School in the UK. He has also worked as a Mathematics teacher and as ICT Coordinator. He holds a Statistics and Management degree from the University of Wales, and a postgraduate degree in Mathematics from the University of Cambridge. He has travelled the world as a rugby player representing England at various levels and Saracens 1st XV. In recent years Jonathan has coached a local junior team, something he wishes to continue here at BSB.

Jon’s leadership style is focused on encouraging staff and students to innovate and work collaboratively, making learning far more powerful. He is highly empathic and positive, full of contagious energy, which is fundamental for the future development of The British School of Barcelona as a learning community.