The Royal Grammar School Guildford Dubai is a forward-looking British Curriculum school located in Tilal Al Ghaf, Sports City. The school welcomed their first pupils in September 2021, starting with Nursery to Year 6 (age 3 -11). With a campus designed for boys and girls aged from 3 to 18, the school will grow year by year.

The school embodies the ethos and values that have underpinned the Royal Grammar School Guildford in the UK for over 500 years. These, combined with a spirit of innovation and development, will prepare pupils for the challenges of the 21st and 22nd centuries. We lead by example, stay true to our values, innovate, collaborate, and strive to be the very best we can be. 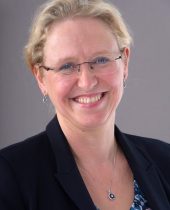 Clare Turnbull is a graduate of the University of Exeter with a BA in Education and French and holds a Master’s in Educational Leadership. She brings a wealth of experience to the Royal Grammar School Guildford Dubai, having held educational leadership positions for over 20 years, including roles as Deputy Head, Director of Studies, and Head of French. She has direct senior leadership experience from RGS Guildford, where she was a member of the senior leadership team for 16 years, 13 of which as Head of Lanesborough (the Preparatory School of RGS Guildford), prior to relocating to Dubai. The school was rated as excellent at last inspection, highlighting the outstanding personal development offered to all the pupils in her care.

Mrs Turnbull has continued her work here in Dubai, building on the rich heritage of the school and the RGS 500-year history, developing a distinctive culture based on shared values and learning habits. As the founding Head of Prep at the Royal Grammar School Guildford Dubai, Mrs Turnbull has naturally transitioned into the role of Principal. Building an inclusive community of staff, pupils and parents is central to her approach – as students who are happy and confident in their surroundings can learn more effectively. She places a particular emphasis on developing the broad interests and strengths of each pupil through excellence in creative arts, critical thinking, leadership, well-being, and co-curricular activities.

Clare Turnbull is an experienced inspector with the Independent Schools Inspectorate (ISI) and was involved in the establishment of the first RGS Guildford international school in Qatar.