Cleverlands: The secrets behind the success of the world’s education superpowers by Lucy Crehan has been named as one of The Economist’s books of the year for 2016. Below, Jonathan Taylor, Head Teacher of North Bridge House Canonbury provides his review.

Cleverlands is essentially the story of one teacher’s journey across five high performing education systems. Fuelled on curiosity – and perhaps no little frustration deriving from her time teaching in the UK state system – Lucy Crehan spent two weeks in each of Finland, Japan, Singapore, Shanghai and Canada. She spent time ‘living with teachers, listening to parents and learning what education looks like in completely different cultures’. The result is a book which should be read by anyone who has an interest in improving education – and a testimony to the merits of crowd funded publishing.

I ‘pledged’ to buy this book in summer of 2015 after hearing Lucy describe her ‘geeky gap year’. I was impressed with her get up and go, her understanding of education in a global context, and her considered approach to evaluating education practice. All these qualities shine through in the book. It is even handed in its treatment of wholly different educational cultures (not an easy task) and deftly references an extensive body of supporting research. Yet, whilst it is academic and analytical as required, it is very much a personal odyssey – and all the more engaging a read as a consequence.

First up was Finland, a country oft cited by more progressive educationalists as a system from which the UK could learn. I have never quite bought the Finland story – a country with a frighteningly high suicide rate, unemployment figures at over 8% and only five Nobel Laureates in its history can’t be doing that well in education terms – so I was looking forward to learning more. Besides explaining the linguistic advantages Finland enjoys by having a language with great orthographic transparency (I’m sure you don’t need me to explain) and a heritage of reading – even in the sixteenth century you weren’t allowed to marry in Finland unless you could read a section of religious text – the author explains that Finns achieve impressive reading results perhaps because of, rather than in spite of, starting school at a later age. There is also discussion of the high quality Special Needs provision and explanation of the high quality textbooks which Finnish teachers utilise to good effect. Certainly, I could see much to admire in the Finnish model, though, like the author, I remain unconvinced by the argument that ‘the brightest kids, they’ll learn anyway, whatever you do with them’.

A trip East follows, with Japan, Shanghai and Singapore next to be explored. Through each of these chapters I was constantly reminded of Macbeath and Mortimore’s argument that the last 30 years of educational research have taught us, inter alia, ‘The context of national culture is a powerful determinant  of parent, student and teacher motivation and that school improvement requires more than simplistic borrowing of remedies from other countries’.  This point is succinctly illustrated by a quote from a Japanese parent on page 65, ‘Japan is a country where if you want to go into society you have to go by the rules, so you have to first learn in school to go by the rules’. A view that underpins the Japanese proverb ‘The nail that sticks out will be hammered in’. The chapter is particularly interesting on the role of ‘education mums’ and the sacrifices expected of them. Japan remains a deeply patriarchal society and it would be unfeasible – and undesirable – to expect British mothers to sacrifice their careers to support their offspring in the way that is culturally dictated to Japanese women. 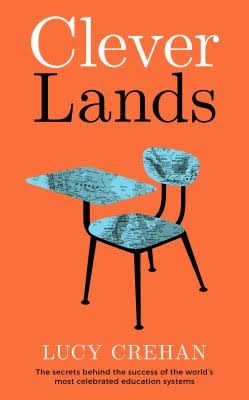 Next stop Singapore. (At this point I started to wonder whether Lucy was planning to write a follow up book about the cleanest countries in the world). Interestingly Singapore has just topped this year’s PISA rankings so no doubt will be under particularly scrutiny in the months ahead. This chapter focusses heavily on the streaming system which is the bedrock of Singaporean educational provision, and includes an excellent examination of intelligence testing and how the original concept has been distorted. It also includes the most striking statistic in a book full of interesting statistics, referencing a survey of Singaporean children aged between 10-12 that revealed a third more children were afraid of the upcoming PSLE exam than they were of their parents dying. If that doesn’t make you question the principles at the heart of the education system then nothing will.

Our intrepid author next ventures to the Middle Kingdom to explore the education system of Shanghai (one of this year’s PISA fallers). I was particularly interested in this chapter having worked extensively with Chinese students and dedicated a large part of my Masters research to comparing Confucian and Western education systems. For people unfamiliar with Confucian learning or ‘the paradox of the Chinese learner’, this chapter makes for a super introduction. The author is also to be commended on her exploration of the Hukou system and its impact on educational outcomes in Shanghai. The Hukuo is a household registration system which determines where a Chinese citizen is allowed to live and is used manipulatively by the  Shanghainese government to control the number of immigrant students (in this sense, non-Shanghainese) included in the PISA assessment to inflate the city’s performance.

The chapter also includes an interesting section on Maths teaching principles and practice which is likely to be of interest to the Maths teachers amongst us. One slightly surprising omission was the Chinese fascination with Western education. With increasing numbers of Chinese students not only applying for university education in the West, but an explosion of Chinese nationals seeking international education programmes in China itself, I felt there was scope for evaluating why such a successful education system hasn’t (yet) managed to stem this trend.

The final stop was Canada. For me this was the least engaging chapter of the book, however, for teachers working in nursery/primary settings it may well be the opposite. There were however, two key takeaways (beyond the discovery that all kindergarten displays were at child height!). Firstly, the significance of specialist Learning Support for those children who require it (much like Finland). And secondly, the fact that the introduction of a commitment to discovery learning has coincided with a slide down the PISA rankings. The book explores whether two are correlated – but I’ll let you read it to discover the answer.

The book finishes with 5 key recommendations that the author believes could be applied in the UK -or elsewhere. I won’t summarise them here, largely as I want you to read the book for yourselves.  Instead, I have outlined three key points which I feel the book highlights or reinforces. Firstly, as noted earlier, the concept of culture cannot be underestimated. The Chinese concept of ‘licking the bitterness’ or the Japanese concept of ‘Gaman’ each reflect a willingness to suffer/sacrifice to achieve a goal. Inseparable from this is the pressure exerted by parents and teachers on children to make this sacrifice. These are cultural phenomena and cannot easily be transplanted to the UK.

However, that doesn’t mean there is nothing we can learn from other countries education systems, or indeed this book. The second most striking thing is the importance of professional knowledge and expertise, particularly around support for students with specific or individual learning needs. Good intentions are no substitute for expertise. Finally, and perhaps indirectly linked to my first point, is what might be termed the concept of ‘shadow education’. Theoretically, PISA compares national education provision, much like in this country we compare schools and regions against each other. Yet, in Singapore students use tutors to get ahead, in Japan they have Juku or ‘cramming schools, in Korea it is the Hagwon. Similarly 42% of London children have received paid tutoring – which I can assure you this is not the case in Wigan. So, if so much learning goes on externally of the school environment, how can we fairly compare schools/systems against each other?

I will end on something of a lament despite this being a wonderful book to read and review. Throughout the book I couldn’t shake the feeling that for all the former teacher was making a broader, more unique impact on education by undertaking this project, UK classrooms are ever so slightly the poorer each time one of our brightest and most dedicated teachers exits. Cleverlands will provide policymakers with ample food for thought, but perhaps they should concentrate their minds most on why the author felt the need to write it in the first place.

A note from Lucy Crehan, Author of Cleverlands: “Thank you to Jonathan for this thoughtful review, and more importantly, for being one of the 360 people who took a chance on it and bought the book before it was even written. This book wouldn’t exist, and would not be getting attention it is, were it not for the good will and good words of people like him.”