Cognita Schools on the ball with advice from Surrey Storm Netballers

Seven Cognita Schools from across England competed in a Netball competition in Guildford on Monday 10th March.

The schools took part in Cognita’s first ever netball competition at the Surrey Sports Park, the elite training venue at the University of Surrey, Guildford and home to Netball Superleague leaders, Surrey Storm. Storm player Georgia Lees and their assistant coach Tallisa Haynes were there on the day to meet the students and give them valuable coaching advice. Surrey Storm beat Hertfordshire Mavericks last Saturday with a nail-biting 52-50 win at the London Olympic Copper Box arena.

Cognita’s Director of Education Geraint Jones said: “I am excited that more than 80 of our promising sporting pupils across the country, aged between 11 and 15 gathered for this competition.”

The overall winners were Quinton House School from Northampton, who won both the Under 13 and Under 15 categories. The full list of results is below: 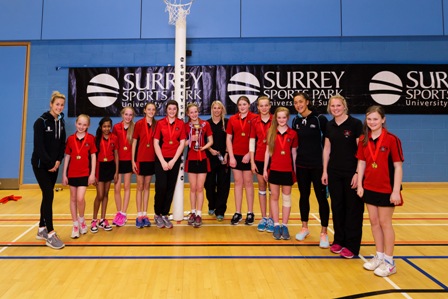